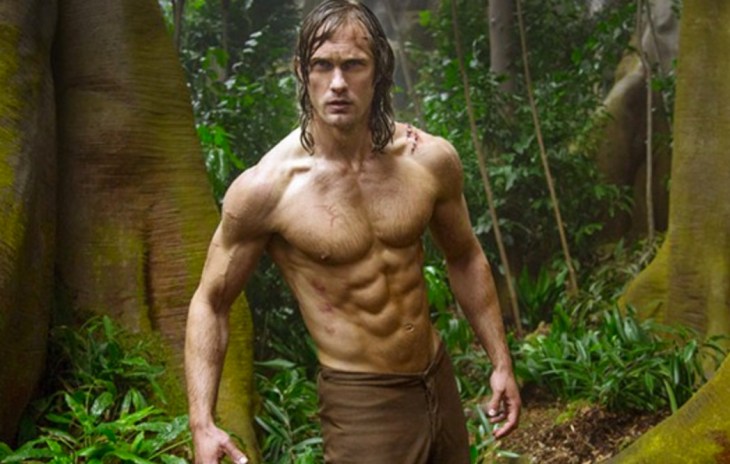 Finally!  EW has come out with a Monday box office report that finally states what’s happening IN THE HEADLINE instead of buried in paragraph four.  Yes — Legend of Tarzan and Dory are neck and neck and by the end of the day today it’s really up in the air who will be ahead. It all depends on how much word of mouth continues to boost Legend of Tarzan.

Future film franchises, take note: Alexander Skarsgård’s abs can apparently catapult a critically-savaged film to box office gold, as Warner Bros.’ The Legend of Tarzan continues to defy expectations after a solid $38.5 million three-day weekend, adding an estimated $7 million on the Fourth of July for a $45.6 million holiday finish.

Tarzan falls just shy of three-time domestic champ Finding Dory and its estimated $50.2 million four-day total, bringing the Pixar sequel’s North American total to around $380.5 million after just 18 days in release. Dory, the Andrew Stanton-directed animated feature which features the voices of Ellen DeGeneres, Albert Brooks, Idris Elba, and Ty Burrell, boasts an $11,660 per-screen average, while Tarzan, David Yates’ first non-Harry Potter film since 2011, averaged $12,796 from 3,561 locations — the highest of any wide release this week, and more than double the number the industry initially projected for the $180 million tentpole.

Keep an eye on the “estimated $7million on the Fourth of July.  If it becomes $8 or$9M, Finding Dory could be in trouble.  And keep in mind, at the level of studio minds trying to figure out whether to do a sequel or not, whether a film comes in first or second is inconsequential for anything other than bragging rights.  It’s all about the actual numbers.

But still, wouldn’t it be sweet to see a bunch of article tomorrow saying that after the actuals all came in, turned out LOT came in first, and Dory was second.